Offering My Testimony: How I Journeyed from Doubt to Faith

“So Jesus asked the twelve, ‘Do you…wish to go away?’ Simon Peter answered him, ‘Lord, to whom can we go? You have the words of eternal life. We have come to believe and know that you are the Holy One of God'” (John 6:67-69). 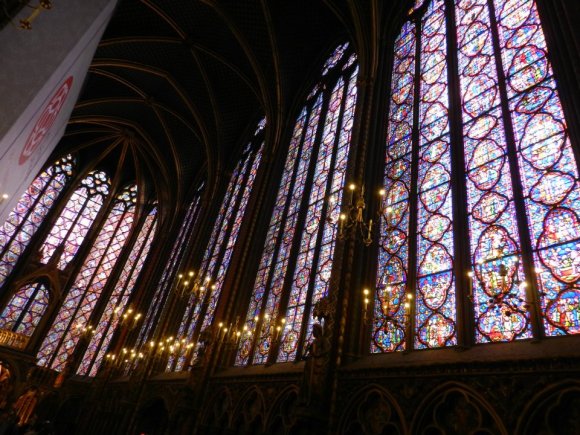 (The Stained-Glass Windows of Sainte-Chapelle in Paris, France–my photo)

In previous posts I’ve mentioned the intellectual reasons why I decided to become a participating member of the Roman Catholic Church. Now, I’d like to tell my story from the perspective of faith.

My parents chose to raise me in the Catholic Church, but we rarely prayed at home. This reality led me to believe that religion was something that people abandoned over time. It seemed to me that once religion had provided the basic tenets of morality, it accomplished its purpose and could be discarded. Nevertheless, I prayed regularly at night, offering my desires up to God and asking Him to hear me.

Throughout high school I mostly continued to go to church and to pray, but other interests occupied the majority of my time: sports, academics, and social life. If I was tired on the weekends, I would skip mass and sleep in. The intensity of my commitment to schoolwork eventually earned me a full scholarship to Wake Forest University, where I would acquire a a double major in Spanish and Religion.

At the start of my time at Wake, many doubts began to enter regarding the faith. I even flirted with agnosticism and atheism during the second semester of my first year while studying abroad in Spain. It occurred to me that religion was comforting and useful but ultimately false. This idea so enchanted me that I began to write a fictional novel about the gullibility of religious believers. All the while, I went to church on occasion out of custom without really believing any of it.

In this state I spent the summer between my freshman and sophomore years in Guatemala, where I carried out a research project on the human rights of women and children. There, I noticed that Catholics took a different approach to their religion. They prayed in their homes, they went to church, and they claimed that they were fighting for justice because of their faith. I had never seen such authenticity!

The seed planted within me while in Guatemala spread its roots during my sophomore year. Figuring that I needed to learn more about Christianity before I summarily accepted or rejected it, I took a class on the Gospel of Matthew. We would cover about a chapter each time we met. Though the class was secular and academic in approach, I began to wonder deep inside whether these things could be true. I thought, “Why would someone have gone through so much trouble to write this stuff down if it weren’t true and if many were persecuted for believing it?” This thought certainly wasn’t proof, but it did start to stir the waters. By the time that we got to the nineteenth chapter of the Gospel of Matthew, I was sold on the idea that, even if Jesus wasn’t God, He was worth following morally. Thus, according to His precepts, I began to sell my things, to give the money to the poor, and to follow Him. Towards the end of the semester, the calling of the Catholic priesthood started to become more of a real possibility for me, as I knew that priests gave their lives to Jesus in a radical way.

All the while, though, I doubted His divinity and trusted in Him as a moral teacher more than as the Son of God. Everything changed during my second summer at college. My friend Hannah and I decided to do the Camino de Santiago, a pilgrimage from southern France to the alleged tomb of St. James in northwest Spain. The walk would take us about 35 days. Midway through the trip, I went in to speak to a cura in Burgos. I felt that it was time to have a serious conversation about the priesthood. After a brief introduction, he asked me rather directly, “David, do you believe in God?” I said, “Yes, Father, I’ve always believed in God.” He responded, “My Son, if that is your answer, then you don’t believe in God. Consider throughout the rest of your pilgrimage why you believe in God, if you really do…” Wow! I got scared. Did I believe in God? If so, where did my belief come from? By the end of the pilgrimage, I came to understand that my belief in God was a gift from God. Whereas before I’d thought that belief in God was something that I had to produce, now I came to see faith as a precious gift that I simply had to receive in humility.

Over the following semesters God started to affirm my belief in more manifest ways. As I had opened myself up to Him by readying myself in a position of reception, it was easier for me to see the will of God in my life. While studying abroad at the University of Oxford, I met a priest whose holiness astounded me. He so clearly held something of God’s joy. I had good grades, nice friends, and a beautiful girlfriend, yet I still wasn’t happy like this priest was, despite the fact that he was poor and celibate! What made him so fulfilled and left me so unsure? At this point I struck up some conversations with the priest, and he gently led me to the Sacrament of Confession. I went to confess my sins, and, as I did so, the wounds of my past healed one by one. When the priest pronounced the absolution and forgiveness of my sins, I knew that God truly had washed me clean through this man. Free from my former wounds, I saw that I was sharing more and more in the joy of the priest I had met.

Impacted by the change and the truth that had overcome me, I did apply to become a priest and entered the Jesuits, a religious order in the Catholic Church, last fall. I’m doing so well, and each step of my journey confirms more and more that I’m in the right place.

Now, I’ve specifically cut out the philosophical and intellectual reasons why I left behind my latent atheism and why I chose the Catholic Church over the numerous other churches out there. Should you be interested, I invite you to go through the other posts of my blog or to e-mail me directly at daveinchow@comcast.net .

I offer a personal invitation to all who read this post: give God a fair chance, open your heart to Him, and He will not fail to answer you.

May God bless you now and always.

2 responses to Offering My Testimony: How I Journeyed from Doubt to Faith